Further grindings from The Rumour Mill 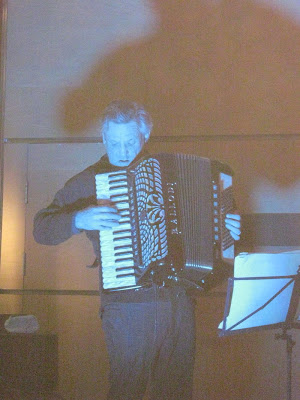 A reliable source close to the Straynotes camp has told this blog that Hugh Stanners, that shadowy figure from the Norwich klezmer underworld, is to meet the band this evening at a secret location for a 'let's see how it goes' jam session.

Hugh, accordionist extraordinaire, made an impromptu appearance with Eastern Straynotes at Cafe Marzano last November where the band rocked the Forum in a display that had fire engines in attendance. If this evening's session goes well the Norfolk Fire Service could be putting in some overtime this summer.
Posted by Jonathan at 16:17 No comments: 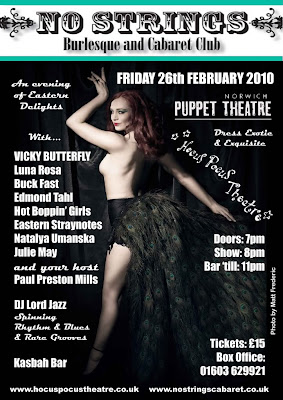 So the three of us turned up at Norwich Puppet Theatre shortly after 5pm for a sound check and then disappeared to a South Indian restaurant on nearby Magdalene Street for a take-away. Back at the venue we disappeared back stage to meet some of the stars of the burlesque scene. We did some waiting in the wings, hearing but not seeing performances, before we trooped onto the stage to strut our stuff. Paul averted the traditional snow-storm but bringing along a file to put all his music in. Andy and I relied on memory and a practised art of blagging when that failed.

Our five klezmer numbers went down very well and it was lovely to see one or two people get up and dance. I like to think there would have been more but the steepness of the rake and closeness of the rows of seats must have made it difficult. The last time I played at the Puppet Theatre was for a showing of Pinocchio almost a year ago. I didn't need to worry about playing to the audience as all the attention was on Gepetto, alias puppeteer Steve Tiplady, and Pinocchio himself. The clarinet tends to make one look downwards and on Friday I discovered I couldn't see beyond the first two rows without adopting a very strange playing position, something I should have tried (and abandoned) in the sound check.

We played in the Kasbah Bar (there was an eastern theme to the evening) during the interval and again had the folk moving to our klezmer/Balkan groove. An exotic, mute beauty was serving wine with her wrist chained to her ankle and her clientele were as cool as midnight in the Arabian desert. Low tables sprinkled with sweetmeats, filmy drapes and a scattering of cushions completed the picture.

Paul had to rush off to another gig at the end of the interval (such is the bassist's lot) and Andy, with childcare duties to perform, went with him. It was left to me to watch the second half which featured a gypsy fortune teller, some fine work with feathers and a bed of nails. I also saw my first male stripper - a comedy spiv routine - who had the good taste to stop while he was still entertaining.

I confess I forgot my camera but there were photographers present, at least one of whom looked like he was a dab hand with a lens, so I hope to track down some pictures to post.
Posted by Jonathan at 08:51 No comments: