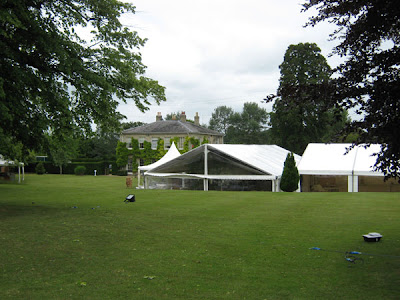 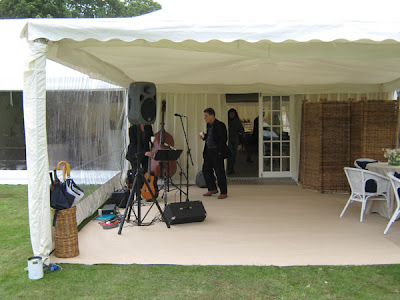 Just before I went off for a week to celebrate the summer solstice in glorious sunshine and nature's abundance the Straynotes drove down the road to a village just outside Stowmarket in Suffolk to perform for pre-lunch drinks. The daughter's wedding had coincided with the parents' wedding anniversary so the marquee, a grand affair with many rooms and 'windows' was pressed into service again.

When we arrived the carpet in the porch was being replaced and as this was where we were to play we had a few moments to peruse the grounds and use the facilities. These included the swankiest mobile toilets I have yet seen; they had carpets on the floors, prints on the walls and various sprays and bottled soaps by the faux-Victorian wash basins. It was the kind of loo where I have to go back and check the picture on the door. While I was in there I was treated to a little of Elgar's 'Nimrod'. Paul and Andy both heard Beethoven piano works emanating from from the 'in-house' sound system.

The hand-warmers came out for the sound check but by the time the guests arrived the day had warmed up sufficiently for the gloves to come off and for the diners to drink cocktails on the lawn. It really did go down very well and one elderly guest, obviously enjoying the band told me how this was 'real music' and you could keep all that pop music, thank you very much. Perhaps he had forgotten that this was the pop music he had grown up with, still sounding fresh today.

Posted by Jonathan at 08:09 No comments: 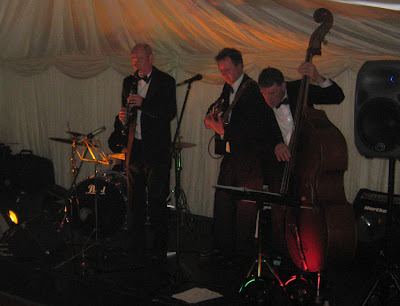 Last night Eastern Straynotes, found themselves playing for a wedding deep in rural Norfolk. We had a wonderful evening. Either we were very good or the guests were very game but we had them dancing from the first number right through to the end of the final set. I will never think of 'Petite Fleur' in the same way again: we performed it as a very upbeat and rousing tango. 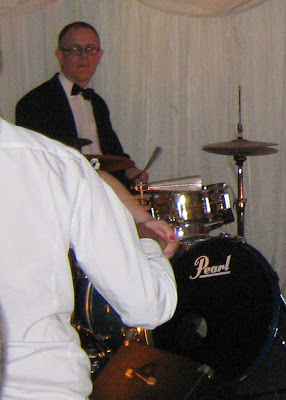 Of course it may have had something to do with our special guest star, Colin Brady, who came along to play drums. A rare gap in the Lee Vasey Band's calender meant he was free for the evening. With versatile use of a small kit he added colour, depth and extra texture to our unique mix of swing, klezmer and the like. I hope it isn't too long before we can play together again.

We also had Paul back on double bass, having missed the last two gigs, and it was clear how much we have gelled as a band since he joined us in November. I am already looking forward to our next gig.

One of the most satisfying aspects of being in Eastern Straynotes is playing music that appeals to so many people of all ages. It reminds the older folk of their youth while the younger crowd recognise a music that was, after all, originally written for the young.

Perhaps the greatest accolade of the evening was being asked if we would travel to north London to play klezmer for a fortieth birthday party next year. And that was a serious enquiry made before the champagne toast! 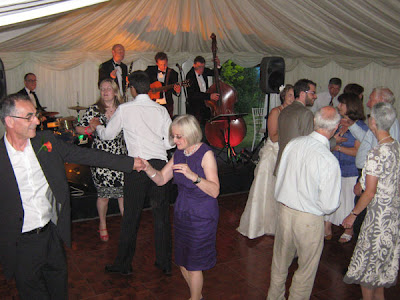 Posted by Jonathan at 15:56 No comments: 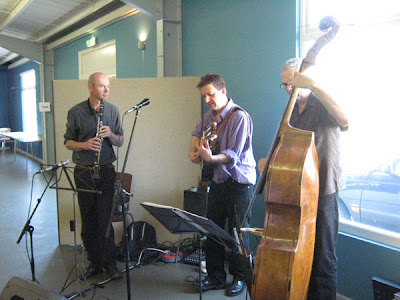 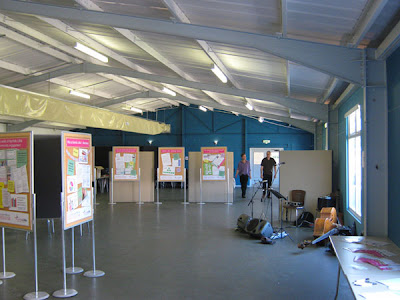 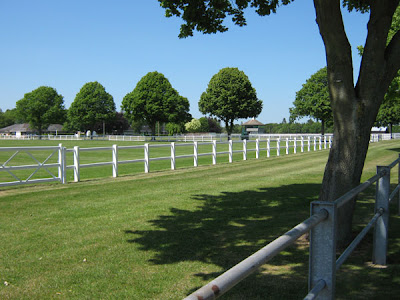 Yesterday saw the band playing for guests of Norfolk LINk at the Norfolk Showground. It was a perfect day and the grounds were looking ready for the Royal Norfolk Show at the end of this month.

It was good to welcome back Dave Pullin on double bass, Paul being unavailable. Dave's memory of our arrangements is to be commended, as is his ability to intuit what was going on in the new material with only a hastily scribbled chart to guide him.

The venue was essentially a brick and steel barn with no carpet to dampen the reflections. This doesn't make for a great acoustic but many people took the trouble to listen and commented favourably. Some even danced. Against the odds we had succeeded in being quiet enough to be a background to conversation yet loud enough to be appreciated for our music.
Posted by Jonathan at 09:42 No comments: