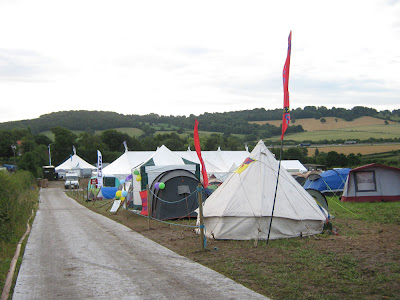 You may wonder what a jazz/klezmer outfit like Eastern Straynote is doing playing at a folk festival. And as the rain came down on my drive from Norwich to north Derbyshire I was wondering the same. The last time I came to Stainsby was with The Crimson Muses back in 2007. It had been a very wet spring and early summer and had been raining solidly for 48 hours prior to my arrival. The whole place was a quagmire and pitching a tent was an impossibility. Fortunately all my children had found other places to be so my partner and I put the back seats down and slept in the back of the car. Calf deep mud didn't quite spoil the weekend, mostly because it actually stopped raining, but it was a close thing.

It had been dry for weeks leading up to Stainsby Festival this year but a couple of rainy days was enough to bring on the mud. Slippery but not deep enough to steal your boots. The Straynotes played on Friday evening and lifted any qualing spirits in the way they know best. Our own spirits had been lifted by seeing Gary Rudd's band, The Lost Padres, playing on the main stage immediately prior to our appearance in 'The Space'.

I had to leave early the next morning to catch up with work back home but took a couple of snaps before I went. It is a small but strange event, somewhere between a beer festival and a hippy reunion. Andy thinks this may reflect the proximity of the beautiful countryside to the M1 which can be seen cutting through the valley. The two food vans in the other pic would tend to back this up: the classic greasy spoon next to the authentic (food cooked by a real Tibetan) ethnic eatery. Neither could provide me with a cup of tea so early in the day, however. 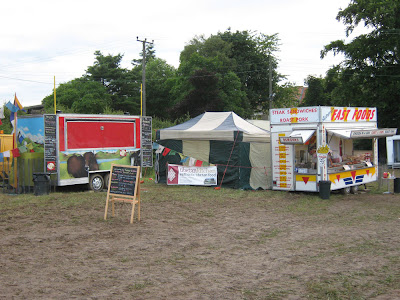 Posted by Jonathan at 15:47 No comments:

The car's the star 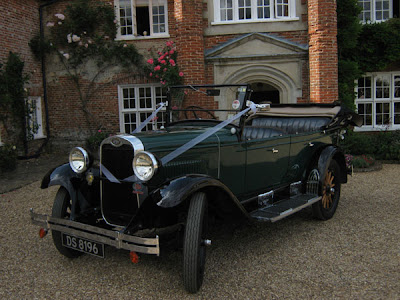 Apparently if you manage to hang on to your old banger until it's twenty years old it becomes a 'classic'. I suppose that's a banger with character. Last weekend the band played two events - a wedding and a drinks party - and each featured a car. These were vintage vehicles, meaning more class than a classic, and both would turn heads wherever they went.

The first was a 1928 Chevrolet National Tourer and arrived at the venue, a rather lovely country house complete with outdoor pool and tennis courts, carrying the bride and groom. I like to think the car's makers would have approved of the 1920s jazz Eastern Straynotes were cranking out as the car drove in on the gravel drive.

The second car was a Rolls Royce of similar age which arrived, as an 'objet' - the only car not to be parked out of sight of the party, just as we were about to begin our first set of the evening. By the time I took the photograph night was drawing in and my 21st century pocket point-and-shoot probably needed a more experienced pair of hands. But you get the picture.

A quick peep at the interiors of both cars left me thinking that, for anything more than a short run, a train journey would afford more comfort. Some things never change. 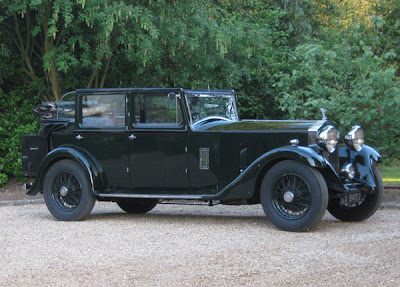 Posted by Jonathan at 07:27 No comments: 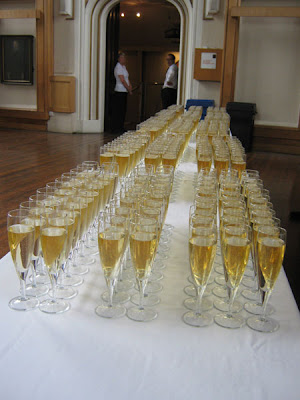 To all those successful graduates at Norwich University College of the Arts. A week ago today Eastern Straynotes were playing for the champagne receptions in Blackfriars Hall. So many graduates require a morning and an afternoon ceremony in neighbouring St Andrew's Hall and on each occasion we provided the music afterwards.

It's a lovely gig, and a repeat booking which is affirming for us - we must be doing something right. Everyone is very happy, proud relatives and relieved students. We play acoustically, as required by the 'brief'. When the hall is empty, or an audience quietly attentive, this is a joy as the room is both warm and bright. Full of exuberant folk celebrating success, Blackfriars presents more of a challenge: vocals and clarinet in particular appear to vanish into space. The trick is not to shout or overblow but to listen more carefully as even if one can't hear oneself, the audience, at least within a certain radius, can hear perfectly well. 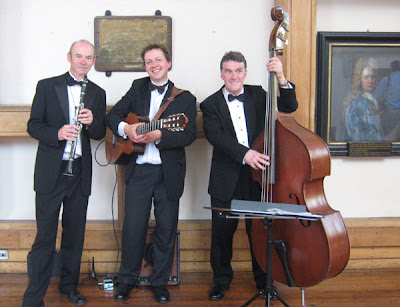 Posted by Jonathan at 07:57 No comments: 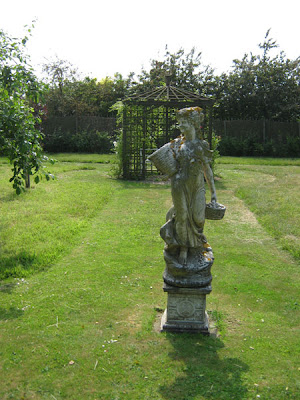 A sunny afternoon in June and a trip to Denham, near historic Bury St Edmunds in Suffolk. We set up prior to an outdoor humanist wedding ceremony. Then, grateful for the shade it provided, played sunny summer sounds beneath a spreading copper beech. I didn't make it into the picture but left my clarinet in the frame to give a sense of scale.

The site was owned by an old couple who kept horse drawn carriages. The carriages were all away at a show, temporarily replaced with the tents of guests from far-flung parts. I don't know how long the property had been in the same family but the couple must have been in their eighties and had inherited the place from the male half's father. They have a wedding party every week in the summer, feeding them in a large barn. The property, not pictured, dates back to the 17th century but I suspect the kitsch statue (no judgement intended) is a little more recent.

People said such lovely things about our music that I wanted to say 'Can I have that in writing?' So, inspired, I have sprinkled the pages of our clunky old website with some of the accolades people have troubled to commit to paper in the past. 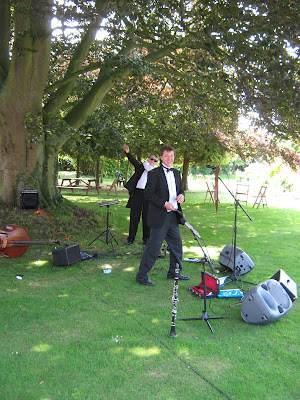 Posted by Jonathan at 08:13 No comments: