Just popped out to Sainsbury's 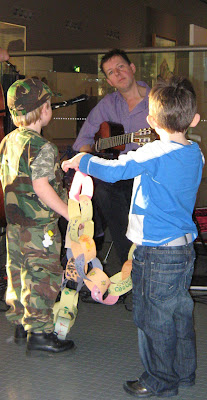 So Andy and I went to the Sainsbury Centre again on Easter Sunday. It was all very pleasant and there was even a mosh-pit of under fives dancing along with the freedom of movement that only the very young achieve. Self-image and worries about stylistic integrity all lie in the future for these guys.

And we had a few friends from Dance Camp East along to say hello which was very gratifying. And tea and cake too.
Posted by Jonathan at 18:53 No comments: 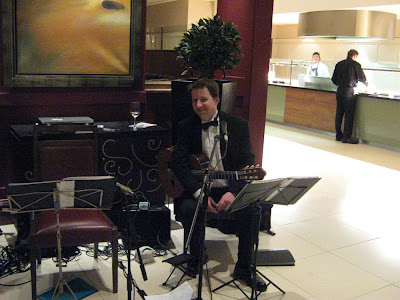 You'd be forgiven for thinking nothing has happened since the last post. In fact we had a play with Hugh Stanners which went very well. We rehearsed again tonight, as a four piece, with gigs at Olives (30th of April) and Wensum Lodge (14th May) in mind. These are followed by a klezmer wedding later in May. The rehearsal went better than I could have hoped. We already sound very good, if I say so myself, and things can only get better

In the meantime Andy and I have been strutting it as a duo at Dunston Hall, a large hotel just south of Norwich. It used to be the country pile of someone very wealthy but I'm afraid I have no idea who that was. i'll take a picture next time we're there in the daylight (at the end of May) and you'll see it in all its splendour. This picture shows a rather mellow Andy half way through his first, and only, glass of white wine and just before we started the third hour-long set of the evening.

On Sunday we'll be down to a duo again at the Sainsbury Centre. Paul is elsewhere for that one but Andy and I will be filling the place with music between 1pm and 3pm.
Posted by Jonathan at 18:33 No comments: