Out on the Town, part one 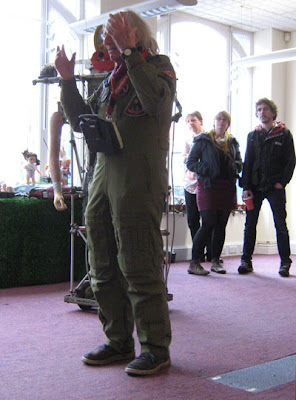 It's not often the Straynotes play in public but recently we managed to do so three times in six days.

I wish I had a photo of us playing at the ShopArt! Live event, organised by Norwich Arts Centre in a disused estate agents' premises on King Street. We played behind a pane of glass each, on the other side of which was our audience. Highly conceptual, and making a big enough impression on guitarist Andy Kirkham to cause him to change the band's name. Fortunately The Manikins reverted to Eastern Straynotes as we cycled home.

Also on the bill was the legendary Bruce Lacey, pictured with a robot he built in the 1960s. The camera angle was poor so you may have to take my word for it. And there's Andy maintaining a safe distance behind.
Posted by Jonathan at 22:06