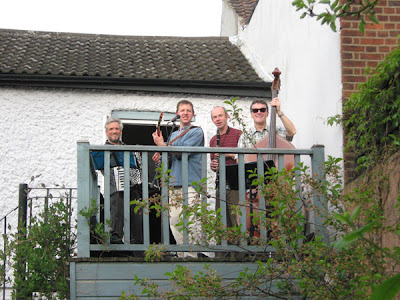 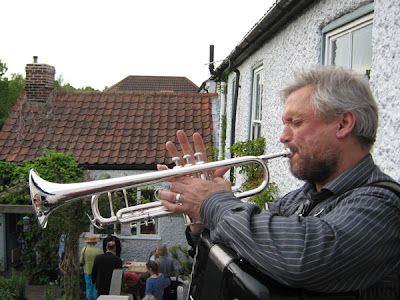 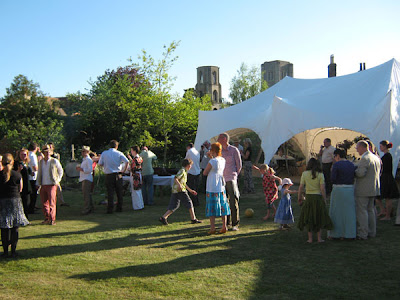 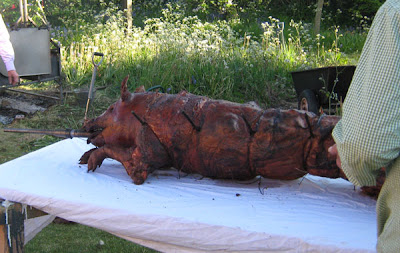 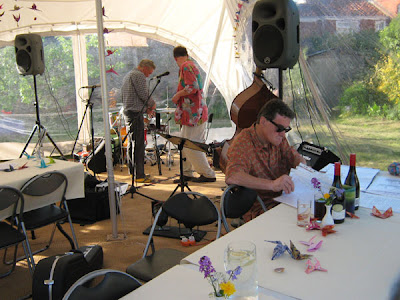 Glorious weather for May with temperatures set to reach 26 in the shade in Norwich. The summer season has kicked off with Rose's charity plant sale on Friday evening followed by our first outdoor wedding of the year last night.

Every year my friend Rose has a charity plant and book sale and, having a garden worthy of the name for the first time in over twenty years, I took a keener interest in the array of seedlings than usual and Paul was quick off the mark with the purchase of a tray of pepper plants. But we were really there for the music and played up on the balcony overlooking the garden. Two sets; a mix of jazz and klezmer. Hugh's accordion lends atmosphere and fire to the latter while his trumpet is a fine addition to the jazz.

Last night we played a wedding with the towers of Wymondham Abbey behind us. A beautiful garden behind a house on the High Street, more origami than I've seen for a long time, wonderful food and even a hog roast for those of a carnivorous inclination.

We played two sets with some cameos from the guests in between. These included a set from the Pancakes - deadpan humour wrapped up in skiffle form. Very funny but sublimely understated - quintessentially English. There was also a lad of about 12 playing some rather fine jazz piano. And Henry, a former band-mate of Andy and Hugh and one of the guests at the wedding, sat in on drums for our second set. His unusual kit includes biscuit tins and an upturned sink and he plays the whole thing with soft-headed beaters. It gave the sound a real lift (I should say now that we don't let just anyone sit in) as evidenced by the enthusiasm of the dancers.
Posted by Jonathan at 09:46