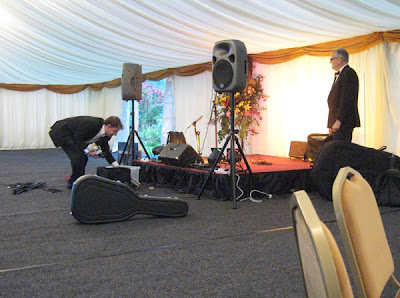 It never ceases to surprise me how often people come up to the band and say, fervently, 'You're playing my kind of music!' The surprising bit is not that they like what the band plays, but the fact that they range in age from twenty-somethings to the over-eighties. (The under twenties just dance and smile.) Earlier in the year, at a function at the Norfolk Showground, we gave away a card to an enthusiastic music-lover. A week or two later he contacted us to ask if we would play at his Golden Wedding Anniversary party.

A fortnight ago the big day arrived and the band set up in a chilly marquee in the blue heart of west Norfolk. That's Andy in the picture, giving guest bassist Dave Pullin (right) and myself a master class in putting together the PA.

The tent soon warmed up as guests moved, sometimes in spite of themselves, to the infectious sound of Eastern Straynotes. It was an audience that knew the genre well, making the compliments we received all the more welcome. However, I think that must really must mark the end of the summer season. My fingerless gloves are at the ready but I make no secret of hoping that the nation's marquees have been retired until next spring.

Every so often someone takes the trouble to write to us after an event and this was one such occasion. Identifying marks have been removed but if you double-click on the letter it should open up big enough to read. 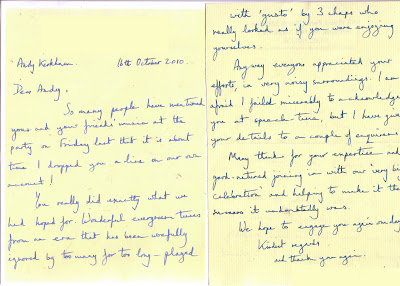